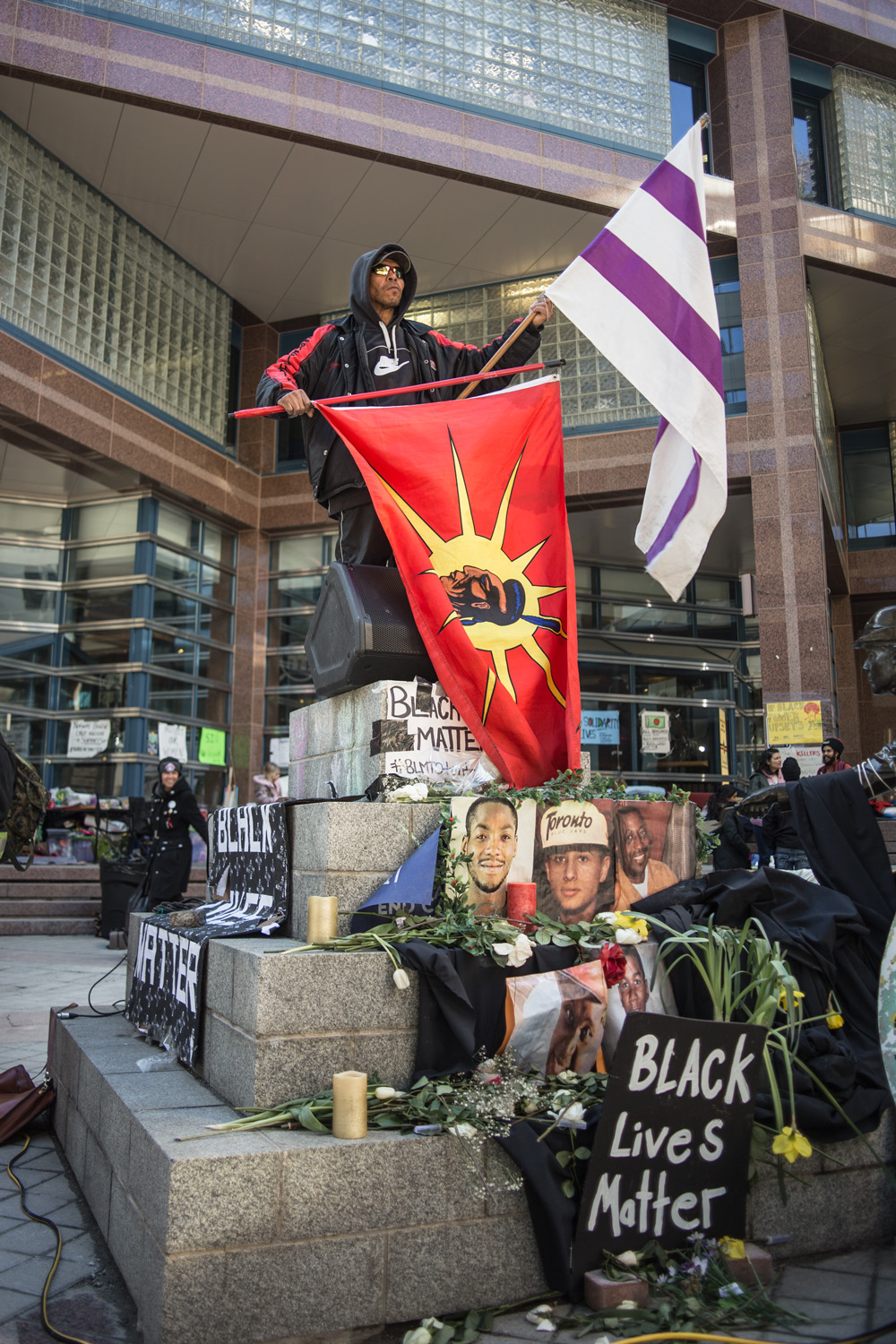 Every day Gary Wassaykeesic climbs onto this statue at Toronto Police headquarters, unfurls the Two Row Wampum, Haudenosaunee Confederacy, and Unity flags, and announces aloud “this is Iroquois land.” For the past ten days, through thunderstorms, freezing rain, and snow, Gary has camped with many others at Black Lives Matter Toronto’s tent city in solidarity with Black and allied Torontonians who demand consequences for police officers who continue to kill civilians with impunity.

It’s powerful to see the strong Indigenous presence at ‪#‎BLMTOtentcity‬, and the continuous recognition by Black Lives Matter organizers that the tent city is established on stolen native land. Indigenous people from various nations have been present 24 hours a day, fulfilling key roles – like medic – to upkeep the movement for Black power.

The Two Row Wampum that Gary displays prominently at this occupation represents a 1613 treaty for this area that the Haudenosaunee read as an agreement with settlers to coexist peacefully in distinct societies – each with their own laws and cultures respected and intact. I’ve seen this in play at BLMTO where different groups appear to respect each other’s needs and boundaries, yet work together against a common threat – an unaccountable police force which disproportionately foments violence against people of colour, yet also promises to generalize misery as it becomes increasingly wealthy, militarized, and powerful.

As a settler on stolen land, I strongly believe we must find ways to uphold this treaty relationship – to learn how to exist peacefully beside the Indigenous society that predates our own while respecting its needs and existence. Up to this point, we’ve failed miserably. We have eviscerated the Indigenous land base through theft, resource extraction, and contamination. We have imposed and legislated poverty, violence, child abduction, and mass incarceration.

We have continually failed to pressure the government of Canada into upholding its own treaty, legal, and fiduciary obligations and can see this in the failure of the public to even blink an eye – or the media to report – when Trudeau backed away from his campaign promise to give Indigenous peoples veto power over resource development projects on their lands.

So its refreshing to see this kind of mutual respect and support spring up at the tent city.

Black Lives Matter Toronto’s tent city was joined last Wednesday by the ‪#‎Webelievesurvivors‬ rally against Jian Ghomeshi’s acquittal. This Tuesday, anti-poverty activists used the space to organize around the issue of an increased minimum wage. It’s amazing to see feminists, Indigenous activists, Black activists, anti-poverty activists, queer and trans activists, and allies supporting eachother in protest against different facets of the same broken system, while all foregrounding the message that Black Lives Matter yet are currently discarded.

Groups are not here to push their own agendas or to erase their differences, nor have they negotiated to put forward a weak position of consensus. They have created power through mutual aid, standing side by side and giving strength and visibility to eachothers’ fights.